The winegrowing Count of Cavour 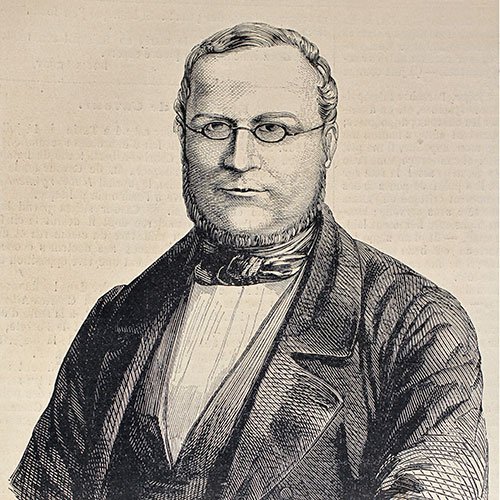 In addition to being the great statesman we know, Count Camillo Benso of Cavour was also a skilled agricultural entrepreneur who, from the mid-nineteenth century, applied innovative cultivation techniques at his estate in Grinzane.

It was 1832 when 22-year-old Camillo Benso, an intelligent, dynamic young man with innovative ideas, arrived in Grinzane.

Those ideas were possibly a little too innovative for the times, and had led to the spread of rumours in Turin that his views were liberal and that he sympathised with the French Revolution.
To keep him out of trouble, his father, Count Michele, thought it would be best to get him out of the capital and sent him to Grinzane, where he committed himself both to local administrative life, becoming mayor of the town, and, more importantly, to economic life, as administrator of the vast Cavour estate, which covered 542 Piedmontese “giornate” of land, equal to over half of the entire territory of the municipality.
At that time, the Cavour properties in Langa exceeded two hundred hectares of land, with the castle, the mill, five sharecropping farmsteads and two which were managed directly.

Valuable information on the history of the Cavour Estate in Grinzane can be inferred from the correspondence that took place almost weekly from 1845 to 1853 between Cavour’s secretary, Carlo Rinaldi, and the tenant farmer, Giovanni Bosco.
Camillo Benso di Cavour, increasingly convinced of the importance of modern agriculture for the economic development of the Kingdom, thought he should set a good example by commencing crop improvement works on his estates, in the hope and with the ambition that it would become a model that other entrepreneurs would soon imitate.

In 1836, Cavour had called Marquis Pier Francesco Staglieno, the general who had already distinguished himself in the Napoleonic era, earning the Legion of Honour on the battlefield, to be his consultant. It was to this man, driven by a deep knowledge of and passion for oenology, that Cavour entrusted the winemaking process in Grinzane.
Staglieno, aware of the problems linked to obsolete agricultural techniques and of the limits and defects of Piedmontese wines, set to work immediately.
He is credited with some substantial innovations: fermentation in closed tanks rather than open vats, to reduce the oxidation of the must; the use of sulphur to allow longer storage of the wine; the purchase of new barrels in different sizes (up to 44 hectolitres). In 1837, Staglieno collected his observations and condensed his oenological knowledge in the book entitled Instructions on the best way to make and store wines in Piedmont.
At the end of the 1830s, the wines of the Count of Cavour’s estate were ready to face the market and were sold throughout the Kingdom of Sardinia.
They were almost certainly bulk sales of wine, shipped in typical containers known as carràs and delivered to the vintners who were responsible for decanting it into their barrels, from which they were transferred into demijohns and from there sold in bulk or served in carafes.
For these years, we have no precise indication of a specific wine from Barolo, bottled and labelled, as we understand it today.
However, the estate’s main activity was viticulture and, in the letters sent by Bosco to Cavour’s secretary, you can follow the entire process, from planting the vines to pruning and through to harvest, from weighing the grapes in the castle to the distillation of brandy and vermouth, and the sale of the wines.

A French wine merchant who lived in Genoa, Louis Oudar, took up residence at Count Cavour’s house as his oenological consultant.
A contract dated the 13th of November 1847 testifies that Cavour had undertaken to sell all his grape production to “Oudart and Bruché” and that the purchasing company would vinify this at its own expense.
From then on “the Frenchman” took up the winemaking reins at the house of Cavour. In a letter dated January 1847, the tenant farmer Giovanni Bosco, sent the Count samples of old wine to be tasted, making clear reference to “two barrels by the Frenchman”, Oudart, and one by Staglieno. The French cask dated back to 1843 and was therefore four years old, as is appropriate for a Barolo, while there was a remainder of twelve “brente” of black wine “alla Staglieno”, which was sweeter.
This shows that the two consultants were active at the house of Cavour at the same time and that they each developed their own style: the Italian pursued a young and slightly sweet Nebbiolo, according to current fashion, while the Frenchman preferred a dry and aged wine, according to the Bordeaux style.
It is probable that for a few years the two systems coexisted side by side, and that Oudart managed the part of production destined for his own company, mention also being made of a white Nebbiolo and a Vermouth.

Like Staglieno, Oudart made sure that various improvements were made in the cellar, from the construction of new barrels to normal repairs, but above all he insisted on the frequent practice of racking. From the correspondence you can also sense the impatient expectation of the beginning of the harvest, still established with old municipal notices, and it reports the registration of all the minutes related to the various operations carried out by the winegrowers.
The sales organisation was remarkable, with the transfer of the grapes from Cavour to “Maison Oudart et Bruché”, the subsequent vinification by Oudart himself, the sale of large batches of wine to taverns and elegant households in Turin, in other Piedmontese towns and, through the winery’s warehouses, in Genoa and abroad.
Another very important innovation was the purchase of the first 1000 glass bottles from France. The following year, 100 bottles of “vino vecchio 1844” were bottled. This is probably the first vintage of Barolo to have been bottled, so 1844 is considered as the start of the modern history of Barolo and its vintages.
The illustrious member of the Academy of Agriculture of Turin, Paolo Francesco Staglieno, worked at Grinzane for a few years as a wine consultant, and while Giovanni Bosco was tenant farmer, avant-garde techniques were introduced by Frenchman Louis Oudart, who collaborated commercially with the house of Cavour from 1843 to 1851.
The economic terms of the collaboration are indicated in the contract for sale of the grapes from the 1847 harvest. In 1850, Oudart’s Genoese winery bought a total of almost 45 tonnes of different grape varieties (Nebbiolo, Dolcetto, Barbera and various others).
Correspondence with Bosco came to an end at the end of 1852. Just in time to discover the name of the new buyer of the grapes of the Grinzane estate, a certain Mr Bottero of Turin.

This is how the history of Barolo intertwines with the history of the Risorgimento and the Unification of Italy. Cavour, Silvio Pellico, Carlo Alberto, Vittorio Emanuele II, the Counts of Mirafiori are among the creators or passionate enthusiasts of Barolo, contributing in various ways to the birth and success of this great wine made from a single grape, Nebbiolo from the hills of the Langhe. So we can say that Cavour was one of the protagonists of the strategies and economic policies aimed at creating a great wine capable of competing with the finest French wines.